Your company doesn’t need a blog. In fact, starting a blog (aka, “content marketing”) is probably a bad idea. But, you say, isn’t content marketing one of the most powerful free growth techniques? Yes and no - writing can be a powerful top-of-funnel strategy, and a fair number of startups have turned it into a strong acquisition channel. But more often than not, blogs never get much traffic, draw potential customers away from your homepage, and damage your brand with low quality “marketing” posts. Myth: Content marketing is free marketing! Truth: Writing - like all marketing tactics - will cost you some combination of money, time, and focus. Myth: Blogging will drive growth fast. Truth: Unless you get lucky with something viral, traffic will likely be low for the first 3-9 months. Myth: Anyone can do it without experience. Truth: As with any other specialty, you’ll need to invest significant time if you want to learn how to use content marketing effectively. Biggest Myth: Content marketing is a traffic gen strategy. Truth: Writing is a product, not a traffic source. It can help nurture potential customers (like a free trial), but it won’t magically make visitors appear on your website.

So what money-free strategies can you use to drive actual traffic?

Happily, you do have a number of “free” acquisition channels that you can start using from day one with just a lot of elbow grease. Startups around the world have tested these strategies for years, and you can reliably use them to jumpstart your business’ growth. But first - make sure you know (1) who you want to reach - your target audience and (2) what you want them to do - your call to action. Then you can start testing and scaling acquisition strategies.

In the black hat computer hacking world, they have a technique called the “watering hole attack”[2. Watering hole attack].  If more traditional efforts like sending fake bank emails don’t work well enough, these hackers will figure out what websites are frequented by people from their target organization or industry.  They’ll then hack one of those third-party websites, secretly plant malware, and wait for their actual target to visit the site and get infected.  And of course this is named after the way many predators in nature wait near the watering holes they know their prey frequent. In marketing, we can use the same insight for much less nefarious ends.  Talk to people from your target audience, and ask them what websites they tend to frequent.  For instance, marketers tend to gather on sites like GrowthHackers and Inbound.org.  Once you know where your audience is already gathered, you can put together a strategy to reach them there. 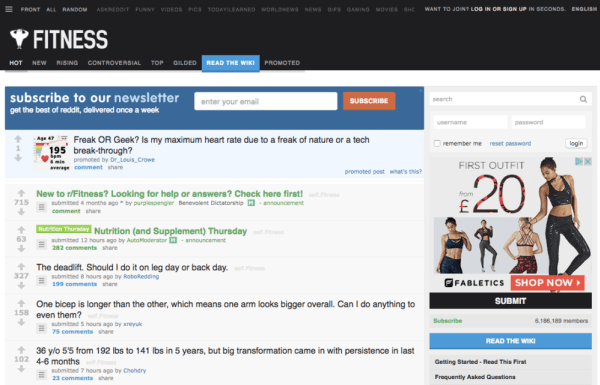 When Sol Orwell and his cofounder started a nutrition research business (Examine.com) focused on fitness enthusiasts, they already knew where their target audience gathered - because they were fitness enthusiasts themselves.  Both were already very active on Reddit, so they naturally shared their project with the community there. Now here’s the important part: this wasn’t just a self-promotion link blast; that would have just resulted in an instant ban.  Instead, their authentic engagement on the subreddit combined with a product that solved a real problem caused people to first listen and then engage.  Looking back a year later, Sol saw that their 30 Reddit traffic was fueled by fully 68 different postings - and only one was posted by him.[2. How Examine.com Founder Sol Orwell Built A 7-Figure Business Off Of Reddit] Reddit worked wonderfully for Examine.com because three critical pieces fell into place:

Just as you want to find where your target audience gathers, you will also want to find who they’re gathering around.  Influencer marketing has been popular for decades with some brands (hey there Nike) built entirely off influencers. Convincing Michael Jordan to promote your product will probably be difficult (and a few million outside your budget), but the real magic is in the “almost” celebrities.  These are the people who are closer to your level - they might be a couple years ahead but they’re still accessible and likely happy to help the new kid on the block. 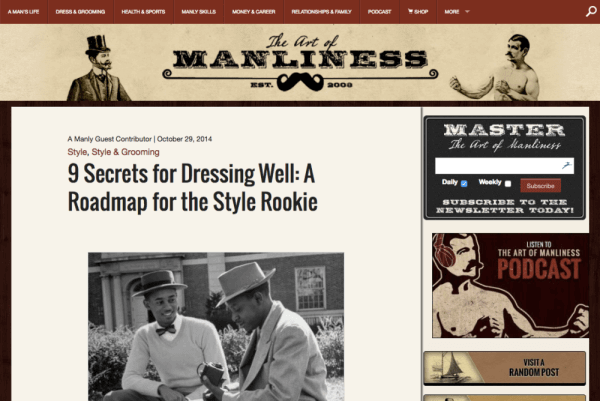 When Robert van Tongeren started a men’s style blog, he looked around for existing celebrities in his chosen topic, and among others he found the Art of Manliness blog.  With over a million readers, getting exposure to their audience could do big things for Robert’s new site. Similar to the watering hole technique, the approach must be made with respect and generosity.  These celebrities often get dozens or even hundreds of emails each day - even if they wanted to they couldn’t help each request.  So instead of just asking for a favor, Robert wisely took a different tack by offering value to them - Art of Manliness frequently accepts guest posts and generously features the author byline at the beginning of the post (most link to guest authors only at the end). Art of Manliness ran his guest post to their readers, and Robert got 300 new email subscribers in the first 2 days.[1. The 2017 Guide For Growing Your Email List 1K in 30 Days] Whether you target a guest post, a simple tweet, or something else, these semi-celebrities can help you reach the hearts of your target customers.

Ultimate Strategy: Give It Time

While watering holes and influencers can certainly help you accelerate growth, the biggest weapon on your side is time.   Most bootstrapped businesses see an exponential growth curve - very slow at first, then snowballing over time.

In 2014, a couple designers launched Hacking UI - a newsletter/magazine about product and frontend design.  Both had day jobs; this was just one of their side projects.  Over the next couple of years, they published regularly, promoted their website, and saw slow growth.  In 2014, they made $6k from newsletter sponsors. In 2015, the two cofounders doubled down on growth and grew revenue respectably to $60k.  Aside from audience growth, this was primarily driven by automating their sponsor sourcing and improving their pricing strategy. In 2016, David and Sagi finally felt safe leaving their day jobs to focus on full-time on their former side projects.[3. How I built (and now scale) my side projects: story, insights, and practical tips] Growth can certainly be accelerated, but it’s like running a marathon.  You can sprint for a while, but ultimately it’s a matter of patiently moving forward (or in growth, trying new strategies) until you get there.