How Elizabeth Holmes improved our lives by breaking sacred taboos

“It ain’t what you don’t know that gets you into trouble. It’s what you know for sure that just ain’t so.” - Mark Twain

Earlier this week, I was listening to Tim Ferriss’ podcast during my evening commute home. As he chatted with his guests, Tim mentioned that one of his life rules, if he has them, would be to question the things everyone else assumes. We assume food is essential to life (probably true), we assume a penny dropped off a tall building is lethal (not true), and we assume that reported earnings are the best measure of a company’s value (more on that later). The best opportunities are the ones no one else is thinking about. (tweet this)

The Eight Outsider CEOs Who Beat The Odds 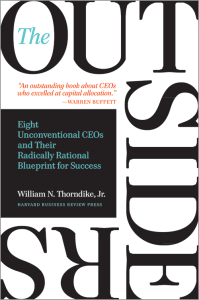 Last week I picked up a copy of The Outsiders.  It’s probably the best book I’ve read yet this year, and I’m not even finished yet. Improving GE’s value by 4000% during his 20 year tenure as CEO, Jack Welsh is one of the best CEOs of all time. Ask any MBA student to name the best business leaders, and his name will surely be on their lips.  But while Jack Welsh is the pinnacle of traditional management success, his performance is thrown into the shadow by the stunning results of eight dark horse CEOs. While Jack Welsh outperformed the S&P 500 (a group of publicly traded companies) by a strong 3.3x, these eight outsider CEOs outperformed the S&P by more than 20x. How did they do it? Quite simply, these CEOs didn’t buy into traditional wisdom.  Most had no management background, and more had engineering degrees than had MBAs.  They didn’t try to make Wall Street happy by maximizing reported earnings (the financial measurement drug of choice), but instead they maximized cashflow.  They didn’t pay dividends, and they did buy back lots of their own stock.  They were fearless when the economy was hedging, and they hedged when the economy soared.  They weren’t afraid to make unpopular moves, and they always based their decisions on data. These outsiders succeeded so well because they brought a fresh perspective to their companies.  Rather than assuming normal “best practices”, these iconoclasts smashed the sacred idols of Harvard Business School and broke their own performance records.

Remember the last time you got blood drawn?  They stick a big needle in your arm and fill a vial with an alarmingly large sample of your blood. That system is flawed.  First, it’s expensive, so most people only take blood tests when needed.  Rather than using blood tests for preventative tracking, we only run tests when something is already wrong.  Secondly, it’s scary, so even after a doctor recommends a blood test some people never do it. Elizabeth Holmes is changing all of that.  Rather than accepting the status quo, Elizabeth questioned why blood tests need to be expensive, why they need to take so long for processing, and why they need to take so much blood.  The answer, she found, was that none of that really was necessary any more.  It might have been 50 years ago, but today technology has advanced far beyond our current lab system.

So Elizabeth left Stanford early to start Thernos.  Ten years later, her company offers affordable blood tests that require only a drop of blood.  And best of all, you don’t even need to stick a needle in your arm; the machine simply pokes your finger to get the small drop of blood. Just as Thernos makes life easier for all of us, it also has potential to save a lot of money for Medicare and Medicaid.  If all blood tests were run as affordably as Thernos’, taxpayers would save more than $200 billion over the next decade. By simply questioning things everyone else assumed, Elizabeth Holmes made healthcare better AND more affordable. (tweet this) What else do we assume that perhaps could be dramatically improved?