Building A $20M Product: The Early Days of Product Hunt

Product Hunt is where people go to talk about the best new products. Each day, members uncover dozens of new product launches and discuss their merits. In just three short years since launching in November 2013, Product Hunt has sent over one hundred million product clicks and views to the thousands of products on the site1. And just recently, Product Hunt was actually acquired by AngelList for a rumored $20M2.

Given Product Hunt’s value in driving massive traffic for newly launched products, many case studies have been written about how to launch successfully on Product Hunt. These are all worth a read, but today I’d like to focus on Product Hunt itself. How did they grow?

Back in January 2014 I had just moved to San Francisco, and I was studying in a marketing bootcamp called Tradecraft. It changed my life, but that’s another story. At the same time as I was a student though, Ryan Hoover was an entrepreneur in residence at Tradecraft. He’d just launched the earliest versions of Product Hunt a couple months before and spent most of his time working out of places like Tradecraft or his favorite Philz Coffee. I only met Ryan personally a couple times, but his attitude - earnest, hard-working, friendly - continues to be one of the driving factors of his success. We’ll get to that later.

Rewind a couple months back to November 2013. Ryan wanted to launch a side project - some sort of curation platform for new products. Rather than spend time and money building out a beautiful product, he figured out how to launch an MVP that very day. First, he created a new group on existing product LinkyDink. Then he invited a few friends and wrote up a short blog post. 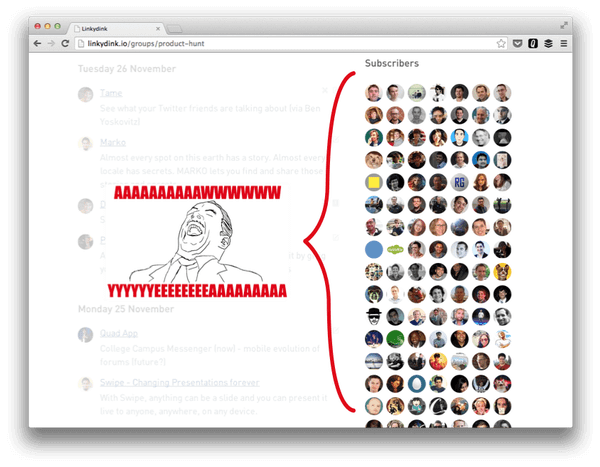 That was it. Because his goal wasn’t to build the finished product on day one - just to take the first step down the path. The most important first step is always to understand whether what you want to build is actually what users want to use. So this first very simple MVP let Ryan get feedback from his startup friends before deciding whether to go further.

And feedback they did: VCs and product folks quickly wrote him back. “Can’t wait to check out more,” and “been wondering why something like this hasn’t existed.”3

That’s when he knew it was time to take it to the next level.

#2 Do things that don’t scale

Over Thanksgiving weekend, Ryan teamed up with Nathan Bashaw to create a real version of the website. In just five days, they designed and coded the first product hunt.4

Then it was time to focus on growth. Product Hunt was still in closed beta, so they slowly expanded a few dozen users at a time. But these weren’t just “users”. Top VCs and journalists were eager to get on Product Hunt because they quickly saw it’s value in their fields where knowing first matters so much. 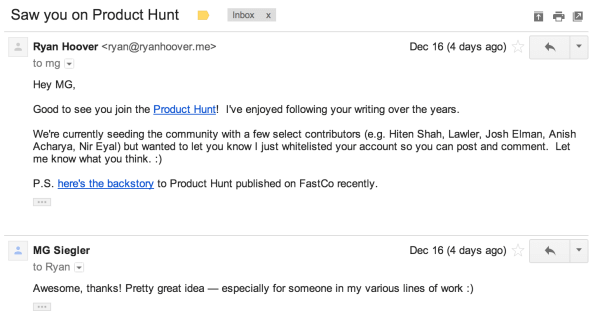 The day they left beta and opened their doors to all, Product Hunt reached 400 users. Many of these were through manual out reach - friends and friends of friends, but many also first heard about Product Hunt through press. Ryan used a “guest posting” strategy - reaching out to companies like Fast Company who were happy to publish articles like “The Wisdom Of The 20-Minute Startup”. And through these unscalable efforts growth continued steadily. Within 20 days of private launch, Product Hunt had 2,000 users5. I am user number 2,450.

Far too often, new startups build buckets with holes in the bottom. They keep dumping new users in the top, and those users just fall right out the bottom.

Ryan was careful to design Product Hunt to be “sticky” - something that users would keep coming back for again and again. The trick is to build something so valuable that people want to come back day after day, and design it such that it’s easy for users to build a habit.

We all know eating vegetables daily is good for us, but most of us struggle to make it a habit (they don’t taste good). Just being good isn’t good enough. You’ve got to help your users build that habit. 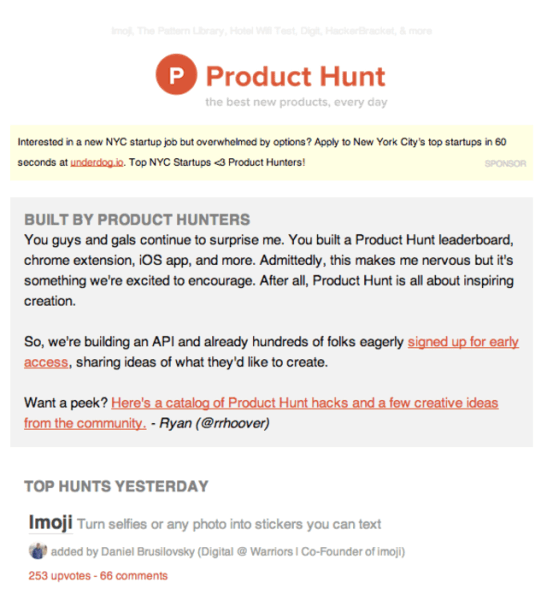 And that’s exactly what Product Hunt did. First, they looked at external prompts that can be used to remind users to come back. A daily digest email gives direct reminders to people who signed up. Daily celebrations of new submissions through Product Hunt’s Twitter account reward makers and hunters, while also prompting Product Hunt Twitter followers to return. And any products that people found through Product Hunt now serve as tertiary reminders - log into Momentum and remember how you first discovered it on Product Hunt.

While external triggers help remind users to return, internal triggers reward users for returning and really cement that daily habit. Very early in Product Hunt’s history, they heard from users that it’s sometimes hard to identify at a glance which products are new and which were already seen. To solve this, Product Hunt took a hint from to-do lists. By default, new products are bolded, but once you visit they fade to light grey. This is still how the UI works today, and it’s perfect because it gives users a real sense of accomplishment not unlike checking things off a to-do list.6 7 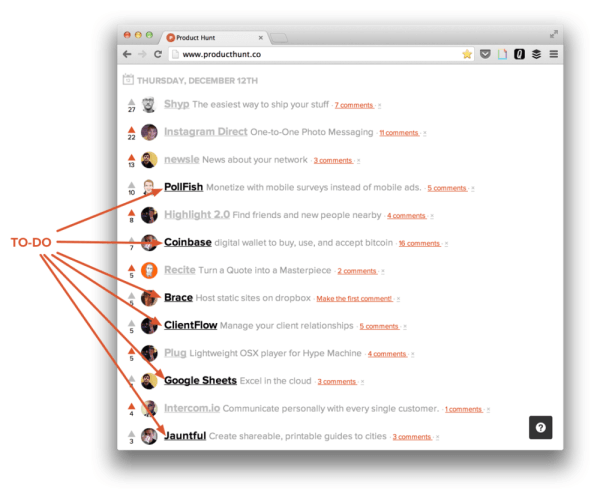