Sequels are always worse than the original, and they always make more money. Captain America: Civil War brought in the most box office cash worldwide of any movie in 2016.  It’s the third Captain America movie in 6 years, and it brought in 58% more than the second sequel.[2. 2016 WORLDWIDE GROSSES] 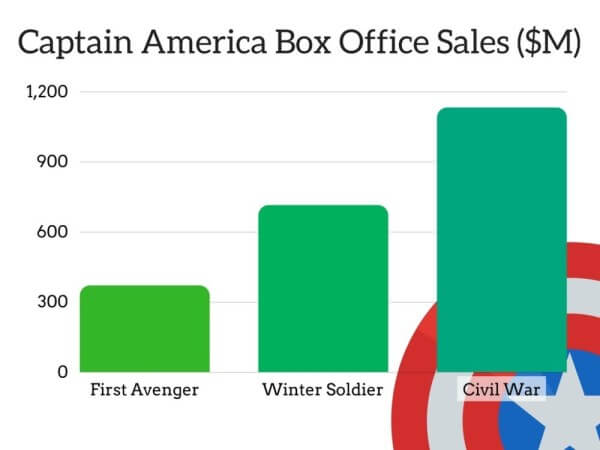 Doing something new is always a risk while repeating something that already worked comes with a pre-made audience. We love to complain about the lack of original movies coming from Hollywood, but then we vote with our dollars to make Furious 7 number six on the all time chart.[2. ALL TIME: WORLDWIDE GROSSES]

The same sequel strategy has brought in millions of dollars this year as classic games get relaunched on mobile.  Pokemon Go swept the world a few months ago, and more recently Super Mario Run launched on iOS to great fanfare. And while nostalgia has seemed to guarantee a fairly reliable success, these two titles have seen different results in their adaption to mobile. Initially, Super Mario Run (SMR) looked successful with an estimated 2.85 million downloads on launch day (vs 900k launch day downloads for Pokemon Go (PG)[2. Super Mario Run smashes Pokémon Go in day one downloads [Updated]]. But when you start digging into engagement numbers, Super Mario doesn’t look quite as successful. Revenue per user leans heavily toward Pokemon Go; Super Mario Run made an estimated $1/user on day one while Pokemon Go made roughly $1.66/user on day one[2. ‘Super Mario Run’ has blown away ‘Pokemon Go’ in its first few days, analysts say]. Similarly, user reviews show a much more positive reaction to Pokemon Go.  With about 43k reviews, Super Mario Run has an average review of 2.5; Pokemon Go has 240k reviews with an average of 3 stars[2. ‘Super Mario Run’ vs. ‘Pokémon GO’: Which App Performed Better?]. The driving factors?  Most negative SMR reviews cite either initial app bugs or frustration over pricing.  Bugs can be fixed, but pricing concerns are the first sign that this game might not have been properly adapted to mobile audiences[2. Super Mario Run — What Users Really Think (hint: they hate paying)].  And the tricky thing about negative reviews is that they have a compounding effect as people are less likely to download lower rated apps[2. How To Use App Reviews and Ratings To Double App Store Conversion Rate].

So what drove Super Mario Run’s initial results (both the good and the bad)?

By all accounts, Nintendo worked closely with Apple to nail the pre-launch promotion. As one of the most popular games of all time, Mario started with a large potential audience just waiting to be activated.  Way back in September, Apple invited Shigeru Miyamoto, Mario’s creator, to demo the upcoming game at their iPhone launch event[2. Super Mario is coming to the iPhone]. More recently, Apple actually ran a feature promo for Super Mario Run ahead of the actual launch - directing users to signup for launch notifications[2. Apple is promoting the heck out of its Super Mario Run exclusive, which launches tomorrow].

Additionally, Super Mario Run decided to launch in 150+ countries at once while Pokemon Go launched in just 3 countries before slowly rolled out to more over the months since[2. ‘Pokemon Go:’ Full list of countries where the game has been released and regions yet to receive it]. While going wide on countries, SMR did however decide to go narrow on platforms: launching iOS-only for now before rolling out to Android sometime in 2017. All this careful launch promotion culminated in a massive flurry of downloads - 40 million in the first 4 days[2. iPhone & iPad向け『SUPER MARIO™ RUN』 App Store最速・配信開始より4日間で全世界4,000万ダウンロード突破のお知らせ].  Despite setting records for iOS App Store downloads, Super Mario Run still caused a dip in Nintendo stock[2. Super Mario Run Breaks All Records, But Leaves Investors Unhappy].  Let’s get into why.

To build a base of active customers, you definitely need traditional marketing - like the launch promotion - to drive product consideration. But a good product is at least as important.  Super Mario Run got 40 million downloads in 4 days[2. Super Mario Run downloaded 40M times in four days], but only ~4% of those folks paid the $9.99 to upgrade to the full product[2. Super Mario Run Generates $14M in First Three Days]. 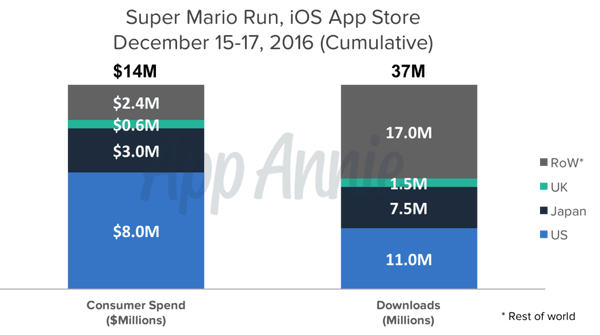 See the game designers behind Super Mario Run come from a world where you buy a game and then play free past that point.  While they recognized that mobile gaming tends to be “freemium” - free to play but with upgrades scattered throughout - they felt that pricing was core to Nintendo’s soul.  So as a compromise, they made a free app with one pay gate between level 3 and level 4.  Once users pay the one $9.99 payment the game is free for life. But while Nintendo’s pricing was well intentioned - they wanted the honesty of a single price - mobile game consumers viewed it differently.  Downloading a free app, users expected what they normally get: a free to play game with paid options to get a better experience. Clash of Clans makes $5M a day off their free game with paid upgrades.  But when users discovered that Nintendo essentially released a free three level trial with the rest of the game behind paywall, customers felt cheated and expressed their frustration in app reviews.  Nintendo understands their purist gamer audience who appreciate paid games that are free to play, but they failed to understand the crossover mobile audience that will ultimately determine the game’s success or failure. 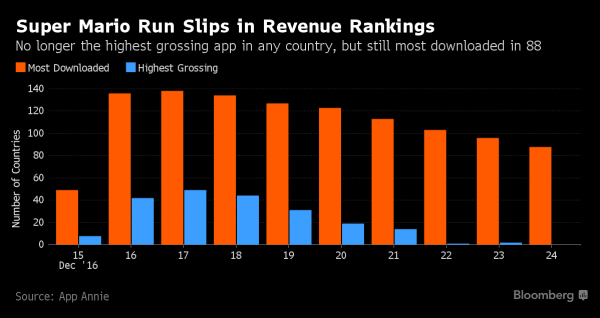 Even as the pricing strategy angered consumers, it also limited the game’s future earnings.  Pokemon Go still tops app revenue charts months after their initial launch as users continue purchasing in-game upgrades.  Super Mario Run on the other hand will only get paid once; even if those users remain engaged they’ll never be prompted to spend again.  This lack of sustained revenue drivers has already lead to Super Mario Run’s fast drop from the “highest grossing app” rankings[2. Super Mario Run No Longer Highest Grossing App in Any Country].

While the most dedicated Nintendo fans are happy to see Mario make it to mobile, gameplay has met with mixed reviews.  More importantly, the game appears to struggle with retaining users for longer than two or three hours.  Pokemon Go on the other hand has successfully kept many users engaged for hundreds of hours. 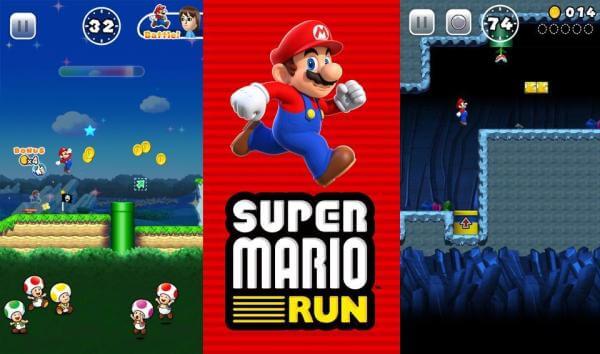 At it’s core, Mario Cart Run is a 24 level game.  Once you beat those levels (and some users have done so in just one hour[2. I Beat Nintendo’s ‘Super Mario Run’ In The First Hour, Now What?]), the “retention loop” Nintendo has built isn’t all that engaging.  You can do two things: (1) do more races with friends or bots and (2) build your “kingdom”.  According to reviewers, neither are particularly engaging.  Kingdom building has worked great for other games - just look at Clash of Clans - but Mario Cart Run seems to have copied the strategy without capturing the magic[2. Ten Minutes of Play Sums Up Nintendo’s Messy Super Mario Debut]. Of course, it’s still very early days and some reviewers do think Mario Cart Run has great replay potential[2. What It’s Like to Play Super Mario Run], so it’ll be interesting to watch over the next few months.  Either way though, Mario Cart Run has guaranteed users will never be asked to pay past the $9.99 paywall[2. Super Mario Run: How to play, how much does it cost and what phones and tablets is it on?], so even if users remain engaged the impact on revenue will be minimal.

So while Super Mario Run might have stolen Pokemon Go’s “most downloaded new app” title, Pokemon still seems to be the healthier app.  Revenue started high and sustained well, and user engagement has intense (sometimes hilariously so). Let’s dive into some of the factors behind Pokemon Go’s launch.

While Pokemon Go didn’t have nearly the prelaunch promotion and slowly rolled out to two or three countries at a time, they managed to still see massive growth in the first couple days by building virality into the game. Highly interested audience - Millions of people around the world had already played the original Pokemon, so they were already primed to be interested in new versions of the game. Innovative game play - Pokemon Go managed to be the first major augmented reality (AR) game on the market, so naturally everyone wanted to share with their friends and give it a go themselves. Virality built in - The core game itself is also highly shareable - as players walk around town catching Pokemon other people will naturally notice and ask questions.  And when a rare Pokemon is discovered, players share the news on social media (more virality) which has lead to large mobs of people trying to catch the rare Pokemon. If one person playing Pokemon Go is noticeable to passersby, groups of hundreds of players running to catch a Vaporeon makes the news.

Additionally on the virality component, Pokemon Go makes it easy to photograph and share the AR gameplay - with Pokemon characters embedded in real-life scenes.  Even major brands have jumped onboard with this trend, like when Paramount Pictures tweeted a Pokemon character at their Star Trek premiere.

While Super Mario Run struggled to adapt their traditional price structure to a mobile world, Pokemon Go jumped into mobile with both feet.  With the game free to play end-to-end, Pokemon Go’s creator Niantic Labs offered paid upgrades throughout.  This translated into a more pleasant experience for users who are used to this pricing structure in other mobile games like Clash of Clans and Boom Beach, but it also translated into more sustainable earnings for the game. 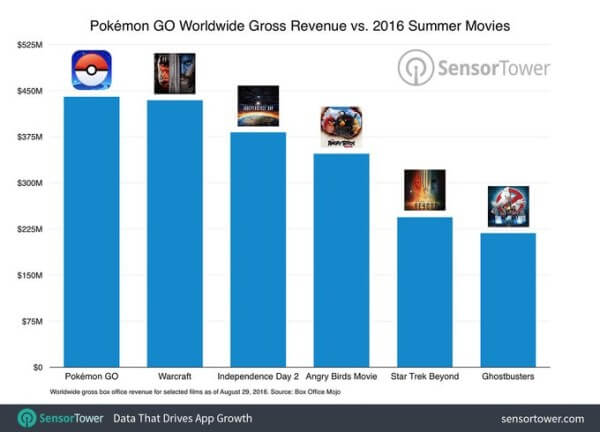 In the first day, Pokemon Go already made an average of $1.66 per user, and that revenue has sustained better than could be expected for such a viral hit.  Within a few months, Pokemon Go made more money than any of the summer 2016 blockbuster movies[2. Pokémon Go becomes the fastest game to ever hit $500 million in revenue], and even as I write this six months post launch Pokemon Go is the #2 highest grossing app in the US iOS app store. 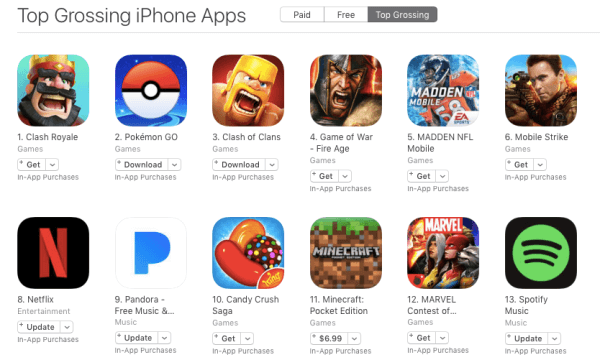 This is another one of those things that’s hard to “add” to a game if it’s not already a core function. Super Mario Run tried to add a social aspect by giving users an option to race against friends outside the game’s primary 24 levels.  Perhaps they’ll be able to polish it into something that more than their most dedicated users enjoy, but initial reactions have felt like the social aspect was more of an afterthought than a real part of the game. Pokemon Go on the other hand has social built directly into the game play in one of two ways: Friends hunting together - Because multiple people can catch the same Pokemon, friends will naturally organize search parties - walking around town, looking for rare Pokemon, and enjoying the time together. Strangers meeting each other - Again because of the way Pokemon stay in one place for a period of time, strangers playing the game will likely run into each other in the real world as they try to catch the same Pokemon.  Some of these random connections will form in-game friendships similar to other digital games, but because Pokemon is played in real-life with AR the social aspect is stronger.

At the end of the day, the biggest difference between these games is also the most elemental. Super Mario Run is a console game adapted to mobile; Pokemon Go is a mobile game.  While Super Mario Run has been adapted quite well and will likely have a good run, the cracks do show and it’s very improbable that it will be able to approach Pokemon Go’s sustained success. As we think about marketing for our own products, we need to work hard to influence the core product - because that is where the battle to win and keep users will ultimately be fought.