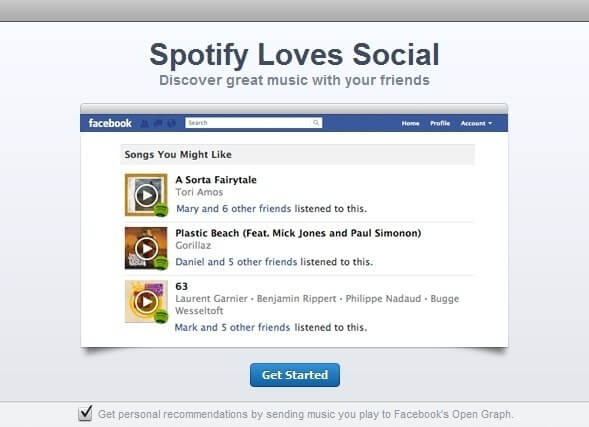 As the famous AirBnB/Craigslist case study demonstrated in 2012, integrating a new product with a larger, established community can lead to massive growth.

Requiring all United States customers to sign up via Facebook, Spotify made it easy to then share your tunes with your Facebook friends.  Tightly integrated with Facebook, those songs showed beautifully within the newsfeed and clicking took potential users to a page where they could listen to the song while being encouraged to join Spotify.

Since Spotify has a strong free offering, this publicity drove millions of new users.  And it didn’t just drive new users; it actually improved the experience for existing users. The Facebook integration seamlessly let users browse the songs their Facebook friends were listening to and even let them share songs with specific friends.

The result? Less than five months after their launch to the United States, Spotify grew to an estimated 8.9 million monthly active users (MAU), many of those from their United States launch. Even more importantly, many of those free users have translated into paying subscribers. Worldwide, Spotify today has 100 million MAU and 30 million paying subscribers (means about 30% of users are paying).

While AirBnB and Craigslist were playing a sum zero game (since they both competed in the short-term rental space), Spotify and Facebook’s separate business models allowed the two to symbiotically help each other grow.  Just as Facebook helped Spotify acquire new customers and improve the existing user experience, Spotify helped Facebook get traction with their “login with Facebook” product.